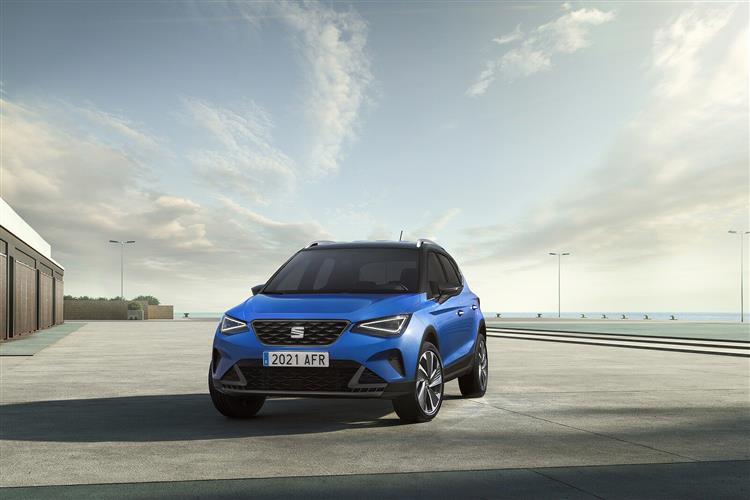 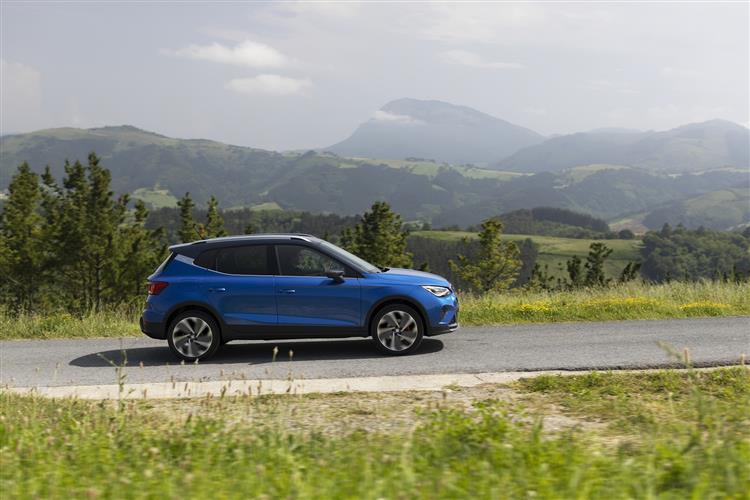 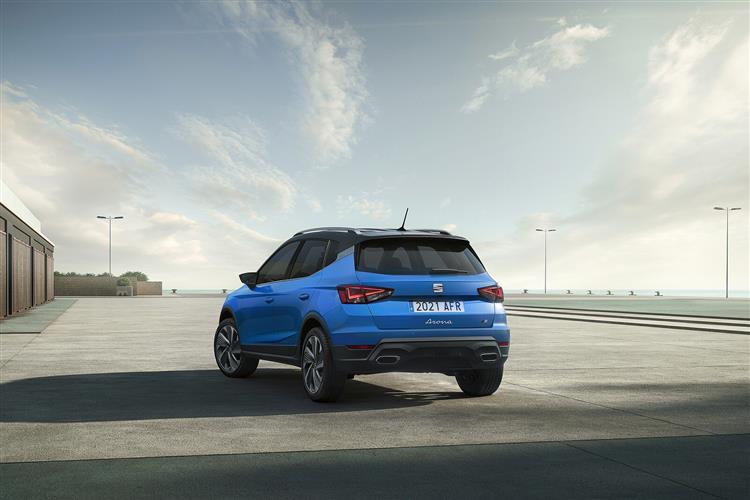 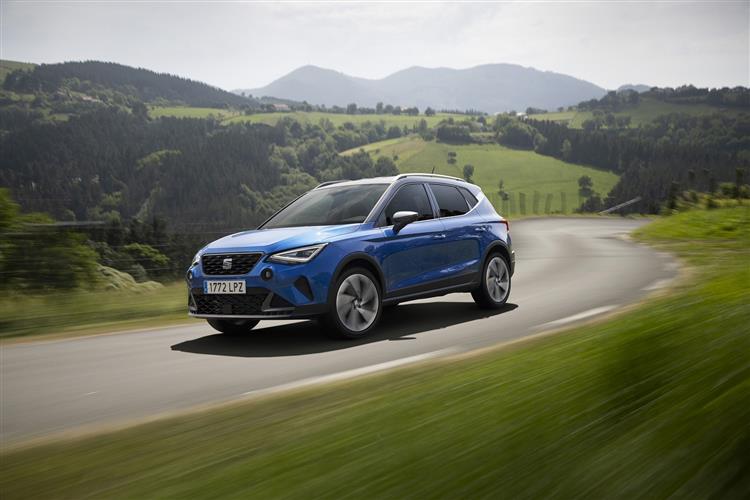 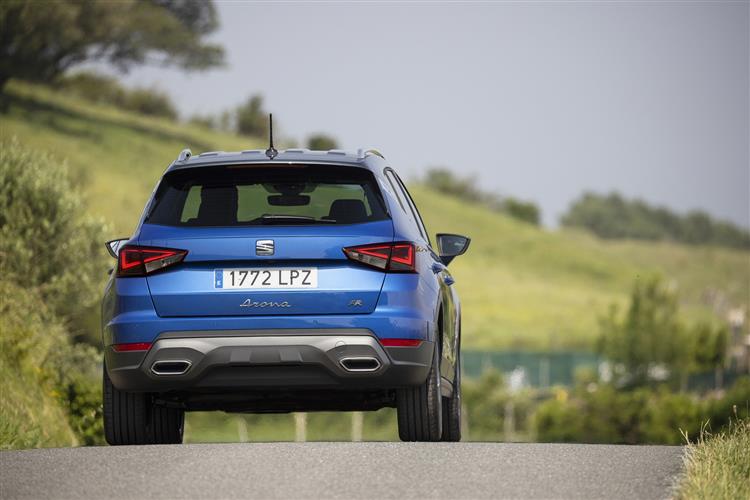 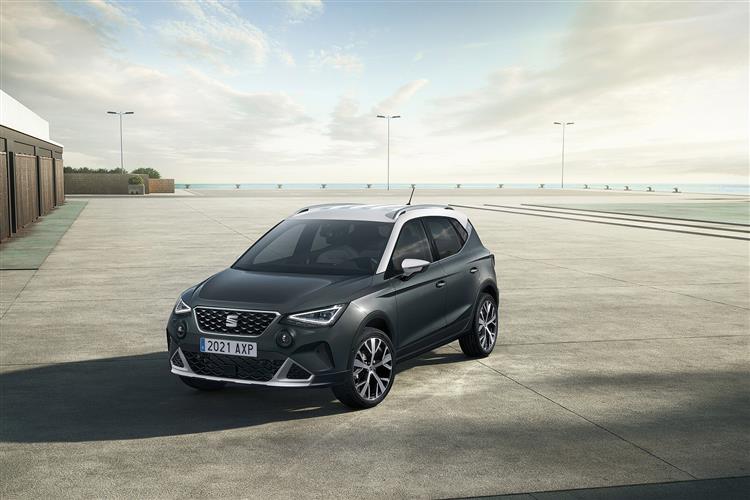 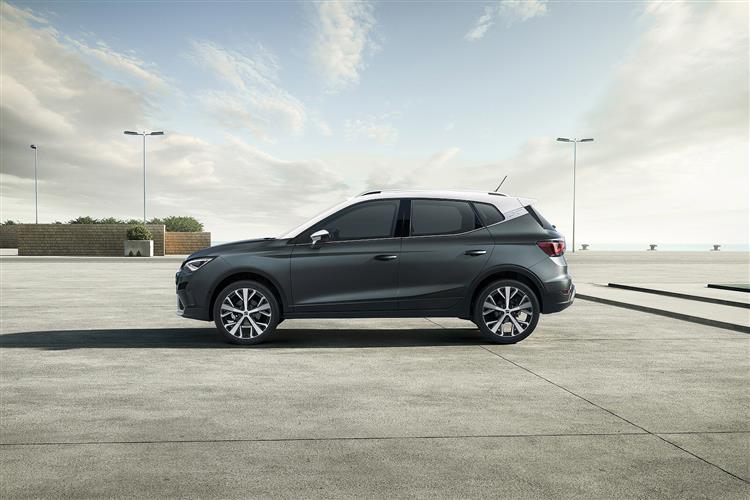 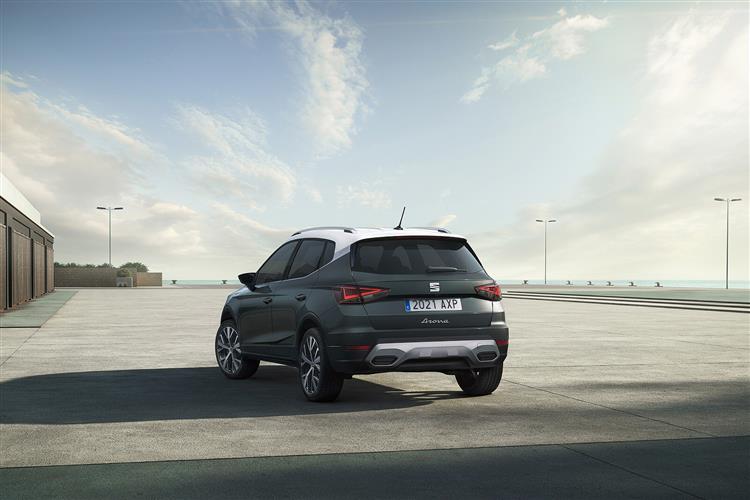 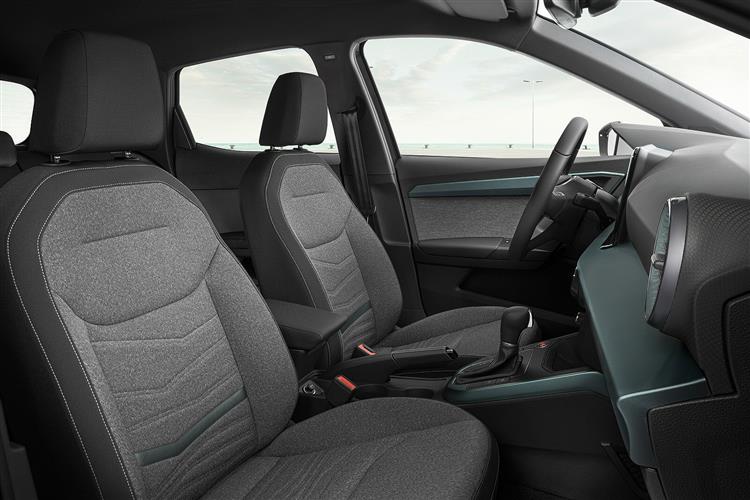 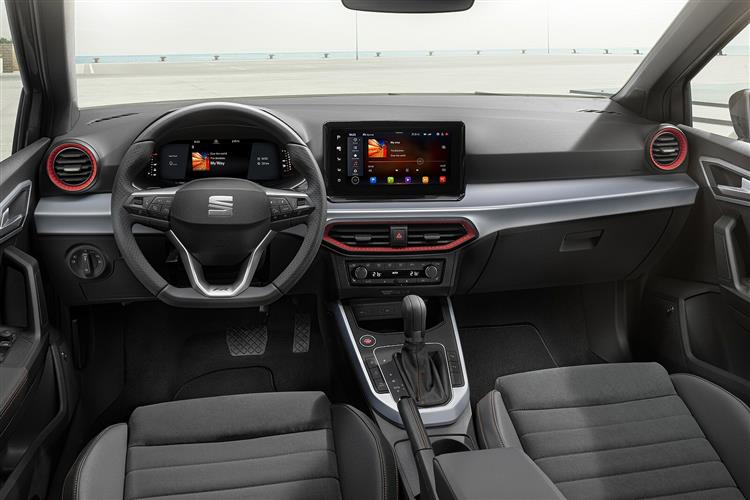 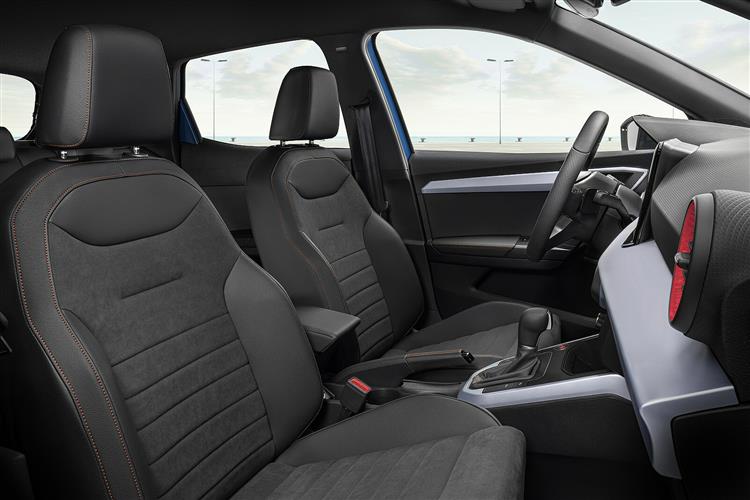 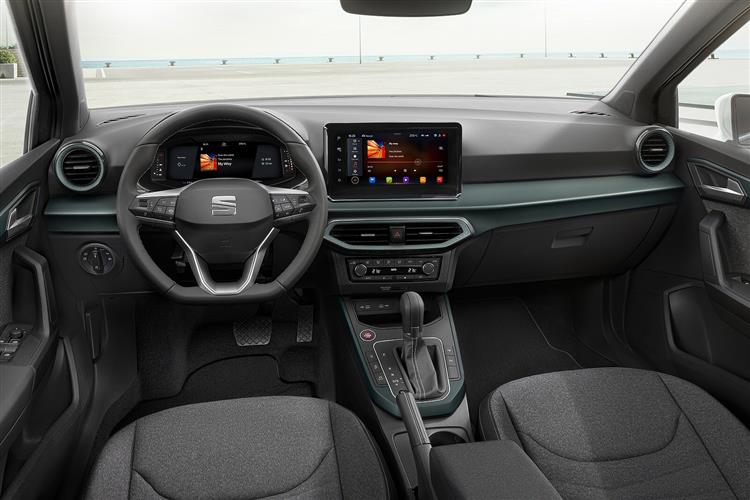 SEAT's Arona is a small SUV with an important role to play in the Spanish maker's model line-up. Jonathan Crouch takes a look at what's on offer from the revised version.

SEAT's conquest of the SUV segment continued with his Arona. It launched back in 2017 to slot into the Spanish maker's line-up just blow the successful Ateca model, which is based in the running gear of the company's Leon family hatch. The Arona, in contrast, is a supermini-based Crossover, so shares its oily bits with the Barcelona marque's Ibiza supermini. This car was developed as part of the 900 million Euro investment set aside to create the fifth generation Ibiza. It targets a compact crossover segment which has increased four-fold in size since 2015 and claims to bring to the sector the 'sports DNA dynamism' that SEAT hopes characterises its brand. Here's the lightly revised version launched in mid-2021.

As expected, the Arona shares the engine line-up used in SEAT's Ibiza supermini, which means that all of the powerplants on offer have direct injection and a turbo. There are various different petrol units to choose from, the headline emphasis being on the usual Volkswagen Group three-cylinder 1.0 TSI petrol unit, available in 95PS form with a five-speed manual gearbox or in 110PS guise with dual-clutch seven-speed DSG auto transmission or a six-speed 'box. The final petrol choice is a 1.5-litre four-cylinder 150PS EcoTSI unit with active cylinder deactivation technology, which is exclusive to the 'FR' trims and is connected to DSG auto transmission. Go for the sporty 'FR' trims and you get dual-mode suspension and the 'SEAT Drive Profile' that allows you to alter the steering, throttle response and suspension feel via four modes: 'Normal', 'Sport', 'Eco' and 'Individual'. There are now no diesel options. All Arona models are front-driven: there's not much appetite in this segment for 4WD. If you happen to be familiar with rivals in the small SUV segment, you may well notice that the steering here is more direct, the corner turn-in's more precise and that body roll is rather better controlled. That's not to say that it feels in any way really sporty: no car in this segment is. SEAT's preference has been to set the Arona up for the low speed, traffic-jinking needs of the urban jungle and sure enough, it feels right at home in that environment, with its great all-round sight lines and tight turning circle.

The changes to this updated Arona are subtle but you might well notice the new LED headlights, the restyled bumper and the smarter 'hot stamped' front grille design. At the rear, there's a new spoiler and diffuser and the Arona badge now gets a hand-written font. As before, this car sits on the same MQB-A0 platform as its Ibiza supermini stablemate and, like its rivals in the segment for small SUVs, this car is trying to give the feel of being a sturdy car for everyday life for the urban jungle. Hence the strong protection in the bumpers, the wheel arches and the dark coloured rubber side skirts, as well as the roof rack and the aluminium look-like protection at the bottom of the bumpers. In terms of its dimensions, the Arona remains compact, 4,138mm long, which is 79mm more than an Ibiza. However, the real difference lies in its height, as the Arona is 99mm taller. As a result, this SUV offers not only higher ground clearance for any off-road adventures, but also more front and rear headroom, and, above all, a larger boot, with a 400-litre capacity. Another important feature is the seat cushion, which is 52mm higher and gives a dual advantage. Firstly, a higher driving position for raised view of the road ahead. And secondly, it makes it much easier to get in and out of the car. The passenger seats are also 62mm higher than they would be in an Ibiza, while headroom is 37mm greater in the front and 33mm in the rear. The suspension height has been increased by 15mm and the windscreen is slightly more vertical for a roomier interior. Interior changes with this improved model include a new soft-touch dashboard with a larger central screen, either 8.25 or 9.2-inches in size, depending on trim. Top models now get a 10.25-inch Digital Cockpit instrument binnacle screen too.

Arona prices start at around £19,000 but expect most variants to sell in the same kind of £21,000 to £24,000 bracket common to the two leading small SUVs, Nissan's Juke and Renault's Captur. Trim levels are based around the usual 'SE', 'SE Technology', 'FR', 'FR Sport', 'Xperience' and 'Xperience Lux' SEAT spec options. The Spanish brand knows that the extent to which buyers will be able to personalise the Arona and make it their own will be important. Colour-wise, the car is divided into two: the lower body on the one hand, and the roof (plus the A and C-pillars) on the other. The roof can be grey, black, orange or the same colour as the body. Globally, there are 68 possible colour combinations. Key equipment features available as options or fitted to plusher models include Auto lights and wipers, a Keyless Entry and Start System, a rear camera, an 8-inch black panel centre-dash infotainment touchscreen, a Park Assistance System and a 'Connectivity Hub' which comes with a Wireless Phone Charger and a GSM signal amplifier. The Arona now includes SEAT CONNECT, giving users access to a range of remote services that help maximise the driving and ownership experience. Users can remotely access their vehicle's data; driving data, parking position, vehicle's status including doors and lights, set-up speed alerts so you can be warned if someone using your vehicle is driving too quickly, area and anti-theft alerts, opening and closing of the doors with the remote lock and unlock service, or remotely activating the horn and turn signals to find the car more easily. Safety spec will also be crucial to sales interest in this car, so the Arona gets all the latest camera-driven tech, including the brand's 'Travel Assist' autonomous driving system which uses a combination of Adaptive Cruise Control (ACC) and Lane Assist. New Side Assist technology makes changing lanes safer, with front and rear-facing radars monitoring the vehicle's blind spots to alert the driver if there are vehicles in the vicinity, should they want to change lanes. Newly introduced Traffic Sign Recognition technology ensures drivers always know what the speed limit is on any given road. Finally, this improved Arona also features Park Assist, which effortlessly parks the car for the driver automatically.

The headline engine is SEATs well regarded 1.0 TSI petrol turbo unit and it should certainly prove to be very frugal. Let's get to the WLTP figures. Expect the 95PS 1.0 TSI version to manage up to 52.3mpg on the combined cycle and 124g/km of CO2. The 1.0 TSI 110PS manual manages up to 53.3mpg and 121g/km. the 1.5 TSI auto manages up to 45.6mpg and 140g/km. All models get an automatic stop & start system to cut the engine when you don't need it, stuck in traffic or waiting at the lights. What else? Well there's SEAT's usual three year/60,000 mile warranty. That's unexceptional when rivals like Toyota and Hyundai offer five years of cover as standard and Kia offers up to seven years. However, the SEAT deal is extendable, so you might be able to negotiate on that. And it includes two years of Europe-wide roadside assistance. SEAT dealers also offer an 'It's Fixed!' low cost servicing programme. To even out the cost of regular maintenance, you can take up fixed price servicing packages for up to three scheduled halts and they go with the car when you sell it if the balance has still to be used.

The Arona, says SEAT, is designed for 'drivers looking for a sense of excitement, distinction and functionality. People who know that age is just a number, not an outlook on life.' In other words, the people who've been busily buying Nissan Jukes and Renault Capturs in considerable numbers over the last five years. The Spanish maker wants in on this lucrative market and the improved version of this little Crossover looks to have everything necessary to entitle them to a useful slice of sales in this segment. The potential for personalisation will be key to this car's prospects, as will the efficiency made possible by its efficient engines and light, stiff MQB-A0 chassis. It took some time for the Iberian maker to bring us a Crossover of this kind but over 350,000 global sales since this model's original 2017 launch have shown that quite a market exists for it. This crossover's got plenty of life left in it yet.