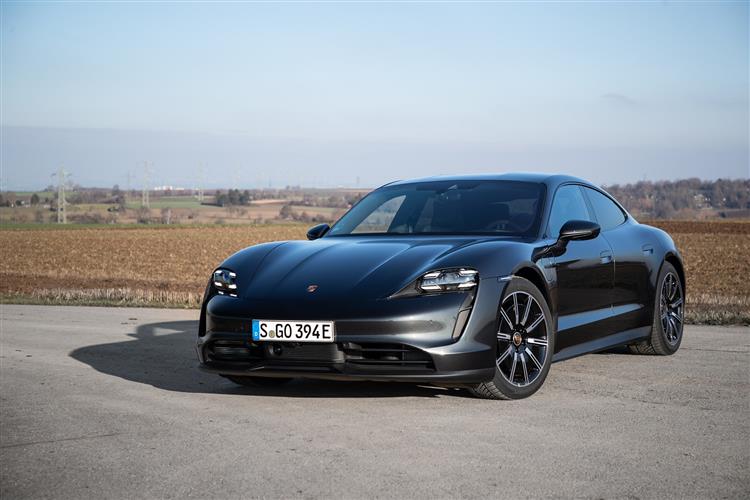 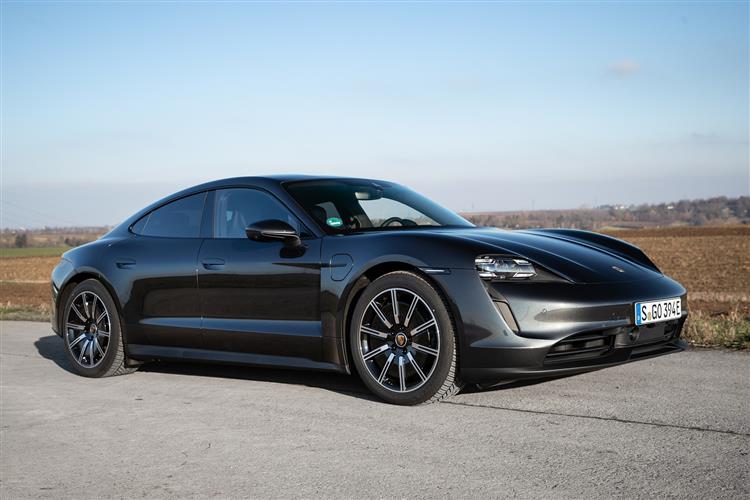 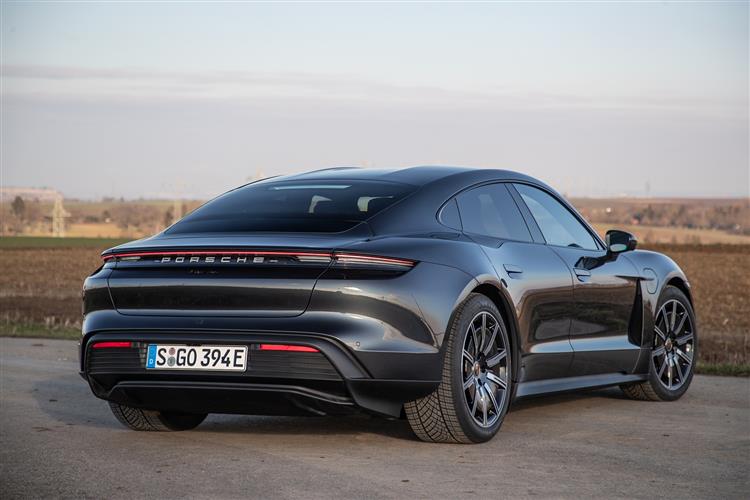 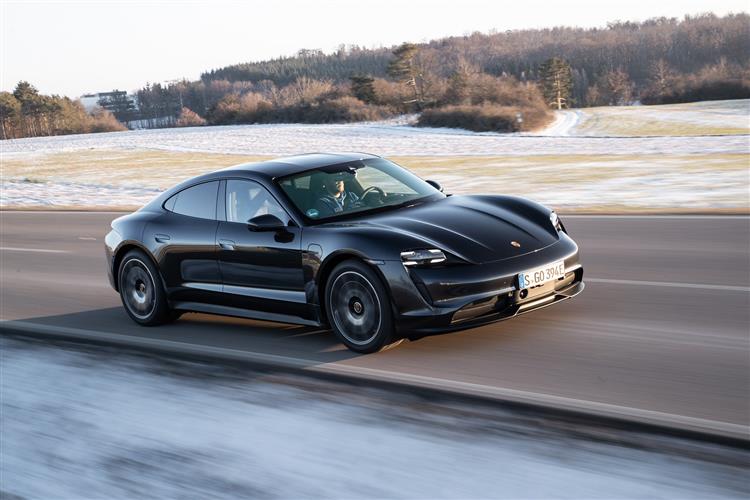 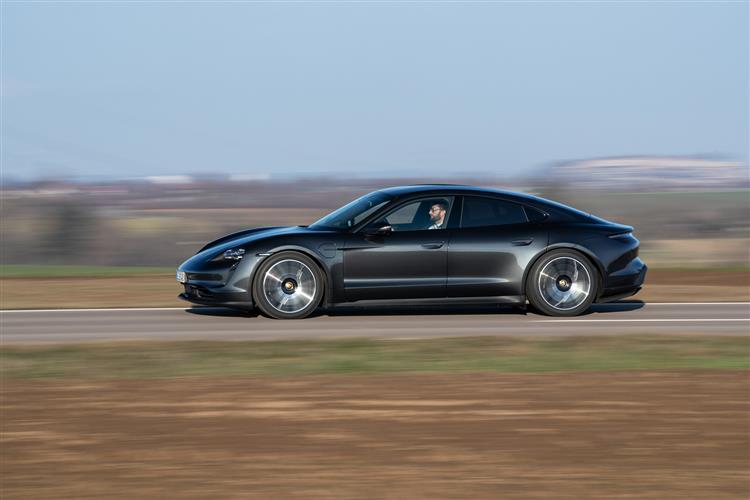 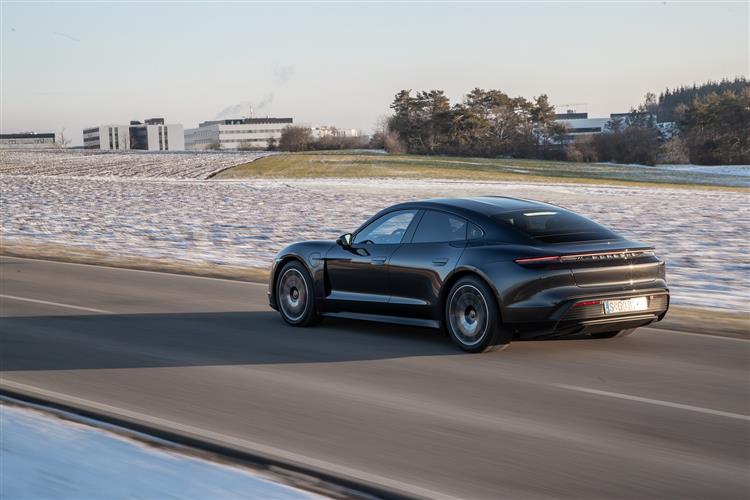 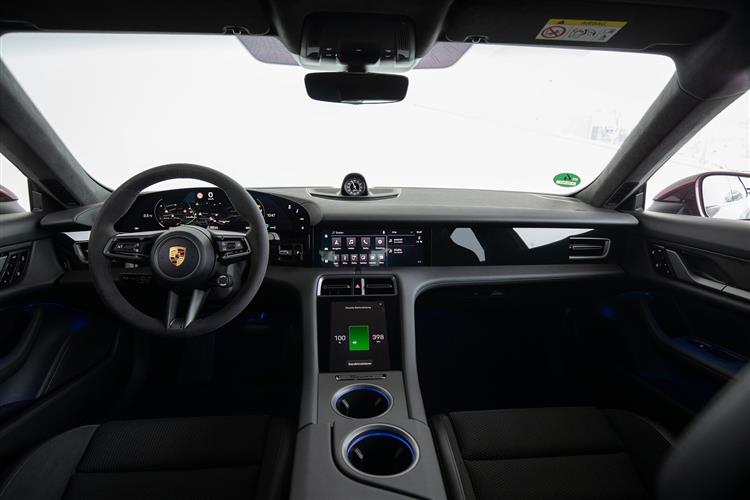 This might be the perfect interpretation of Porsche's Taycan concept. This luxury EV first appeared in Sports Saloon four-door form. Then we got the Cross Turismo SUV version. What if you could get the best of both, the suspension of the Sports Saloon with the practicality of the Cross Turismo body shape? That's the idea behind the Taycan Sport Turismo. There's a wider choice of battery and drivetrain options with this third interpretation of the Taycan theme - compared to the 'Cross' version anyway. You can have a rear-driven variant - and one with Porsche's smaller 79.2kWh battery, neither option possible with the Cross Turismo. That means a significantly lower entry price them with the 'Cross' too. Sounds interesting.

All Sport Turismo derivatives are almost indecently fast. Even the base 'Sport Turismo' variant has 408PS and gets to 62mph in just 5.4s en route to 143mph. The 530PS 4S version improves those stats to 4.0s and like all other models, must be limited to a top speed of 155mph. The 598PS GTS version sprints to 62mph in 3.7s, the Turbo manages it in 3.2s and the Turbo S delivers 2.8s. The Sport Turismo shares the same powertrain options as the normal Taycan Sports Saloon and, like that model, can be ordered in its most affordable form with two things most customers for this Porsche EV don't tend to want - rear wheel drive and the smaller 79.2kWh battery pack. We're referring there to the base rear-driven 'Sport Turismo' variant at the base of the range: otherwise, all versions are 4WD, which means they get the Taycan's usual twin e-motor set-up, with the rear unit driving a 2-speed transmission featuring a shorter initial ratio optimised for initial acceleration. The bigger 93.4kWh 'Performance Battery Plus' package is optional on the standard and 4S variants - but included further up the line-up. This will take the car anywhere up to 309 miles, depending on variant and the conditions. Though not if you exercise your right foot as you'll be tempted to. None of the dynamic stuff in play here is anything we haven't seen before - torque vectoring, adaptive damping with 3-chamber air suspension, and, optionally, rear wheel steering and 'PDCC' electromechanical roll stabilisation. But with Porsche's 4D Chassis Control set-up coordinating it all like the conductor of an orchestra, the result through the turns is quite simply astonishing when you consider the amount of weight in play here. And the steering, brakes and ride quality are all brilliant - almost 911-like. No other large EV drives like this. The soul of a sports car? That about covers it.

Just to be clear: this Sport Turismo model has the same bodyshell as the Cross Turismo, but without side cladding or raised suspension. As with the 'Cross', it has a nose section differentiated from that of the ordinary four-door Taycan by a specific front apron. The unusual profile's defined by a sporty fly line that slopes towards the rear, ending in high-gloss black fixed roof spoiler. And as on the saloon, there are flat door handles that are flush with the doors and pop out electrically when required. Inside, as with every model in the Taycan line, classic Porsche design staples mix with modern technology. The instrument cluster is wider than the steering wheel in a manner reminiscent of the original 911. Take a closer look though, and you'll find that what lies behind the chunky three-spoke wheel is anything but retro, a 16.8-inch curved digital screen, one of up to four in the cabin. There's a lower 8.4-inch touchpad on the centre console. Just below a 10.9-inch 'PCM' 'Porsche Communication Management' central infotainment monitor which can be optionally extended with a further supplementary display for the front passenger. There's a lot to take in. In the rear, a roof line modified over the Sports Saloon enables rear seat passengers to enjoy 47mm more headroom. Clever so-called 'foot garages' scooped out of the EV floorplan mean that there's plenty of space for your feet. You don't get the middle part of the rear bench as standard; that's only supplied as part of an extra-cost '4+1' package. As you'd expect from this Sport Turismo model's more practical body style, the boot is bigger than that of the Taycan Sports Saloon, increased from the 407-litre total you get with that EV sedan to 446-litres here. As on other Taycans, there's also an additional 84-litre front 'frunk' compartment.

If you're comparing against the Cross Turismo, you need to know that only the Sport Turismo offers an entry-level rear-driven single motor 408PS model, priced from around £74,000 at the time of this test. But that and the next model up in the Sport Turismo range, the AWD Taycan 4S Sport Turismo (which costs around £85,000 and puts out 530PS), both come as standard only with Porsche's smaller 79.2kWh battery pack. With either of these two base 'Sport' variants, you have to pay around £4,500 more for the larger 93.4kWh 'Performance Battery Plus' package, which we think would be an important additional spend to make: range capability is already limited in this Porsche compared to obvious rivals and you don't want to make things worse. The mid-range Sport Turismo model, the AWD Taycan GTS Sport Turismo with 598PS, does get the bigger 93kWh battery as standard, but it also gets a much higher price tag - around £105,000. With both the crossover versions of this body style, the top of the line Turbo and Turbo S offerings are the same in powertrain and much the same in price. Either way, you're looking at around £118,000 for the 680PS Turbo or around £140,000 for the flagship Turbo S.

You'll be wanting to know about WLTP driving range. Well it's some way off what you'd get from a comparable Tesla Model X. The exact figure depends on your model variant choice and, with the standard and 4S models, with your choice between Porsche's smaller 79.2kWh battery and the brand's larger 93kWh 'Performance Battery Plus' pack. The base Taycan Sport Turismo variant will take you up to 269 miles with the smaller battery - or up to 306 miles with the larger one. With the 4S, the figures are 274 and 309 miles. Higher range models only have the larger battery. With the GTS, the range is 304 miles, with the Turbo it's 305 miles and with the Turbo S, it drops to a best of 285 miles. The key difference with this EV over most of its rivals lies in its 800-volt power supply, which is double that normally seen with electric cars and is based on tech trialled by Porsche in its Le Mans-winning 919 Hybrid race car. The idea here is that by pushing up voltage, you can drop the current without affecting power output. Lower current means faster charging times. Using a three-phase 11kWh wallbox, replenishment will take around 9 hours; a more common 7.2kW garage wallbox not requiring a three-phase supply would take slightly longer. Porsche is keen to talk of the Taycan Sport Turismo's peak charging capacity of 270kW, which theoretically means that the 93kWh battery can be recharged from 5% to 80% in just 22.5 minutes: that's at an 800-volt charging station. Currently, there are only a handful of those in the UK... A more easily located 400-volt public charging station will take about an hour and a half to do the same thing - providing you pay Porsche extra for the optional on-board booster which increases the car's standard charging peak from 50kW to 150kW.

So this is the future face of Porsche. EV technology, futuristic looks, fearsome performance and lots of VW Group influence. Died-in-the-wool 911 enthusiasts need not apply. But the enlightened lottery winners among them might find something to like with this Taycan Sport Turismo. It gives you everything you'd want from a Taycan - and nothing you don't. It's not quite as much of an automotive Swiss army knife as the Taycan Cross Turismo. But a typical Sport Turismo customer won't need this car to be that. They'll simply want a practical, devastatingly quick and imposing expression of Porsche EV technology. You'll get that here.

END_OF_DOCUMENT_TOKEN_TO_BE_REPLACED

"I have recently taken delivery of a company vehicle via Silverstone. I was introduced to them by my accountant who said they were very competitive. A major factor for me was that Volkswagen wanted a £3k deposit during the 4 month build period. That is a lot of money sitting in someone else's bank. The deal I got and the service I received from start to finish was excellent. The staff are very friendly and professional. There was not one step of the process where I was not kept informed. I will definitely be using them again and highly recommend them. UPDATE June 22 - I have just taken delivery of another vehicle via Aby at Silverstone FM. The service was excellent yet again. No messing around at multiple dealerships, the admin process was easy and straight forward. Highly recommended yet again."

"From start to finish the service has been fantastic, nothing was too much effort, the car arrived on time and the whole process was simple and effective. Would definitely use again."

"Amazing colleagues always on hand to help. Abi has been first class in helping me with my previous purchase and my recent enquiries. She was warm, welcoming and super supportive. A brilliant asset to the team at Silverstone Fleet Management. 👍🏽👏🏽"

"Ryan was great from start to finish! Very patient in an ever evolving situation but we got there in the end! Thanks again"