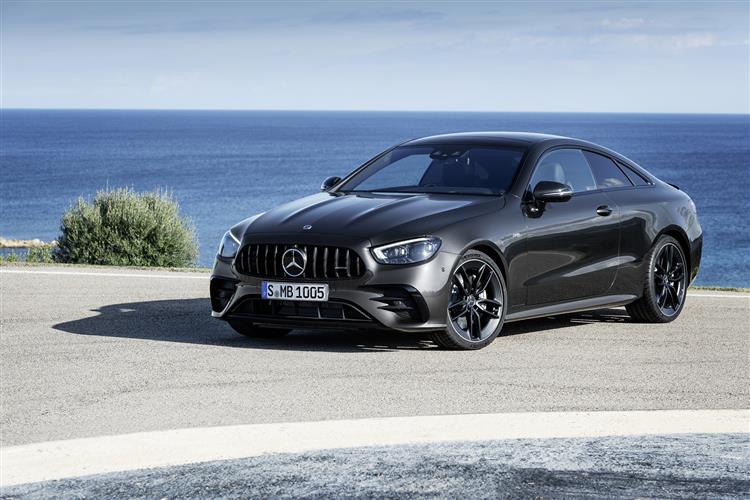 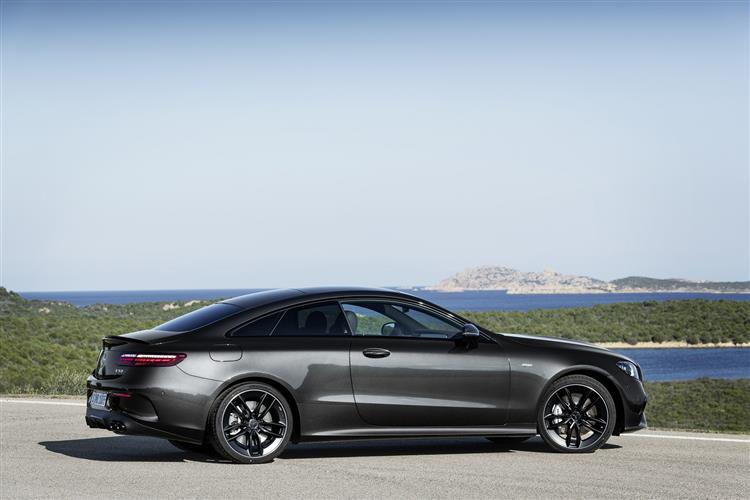 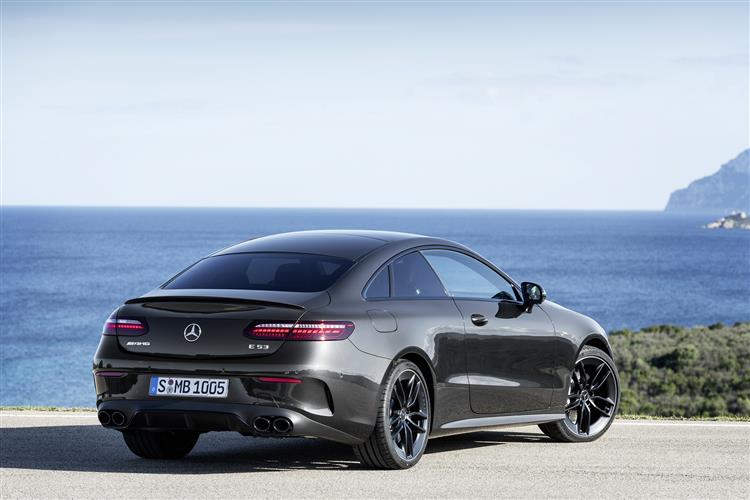 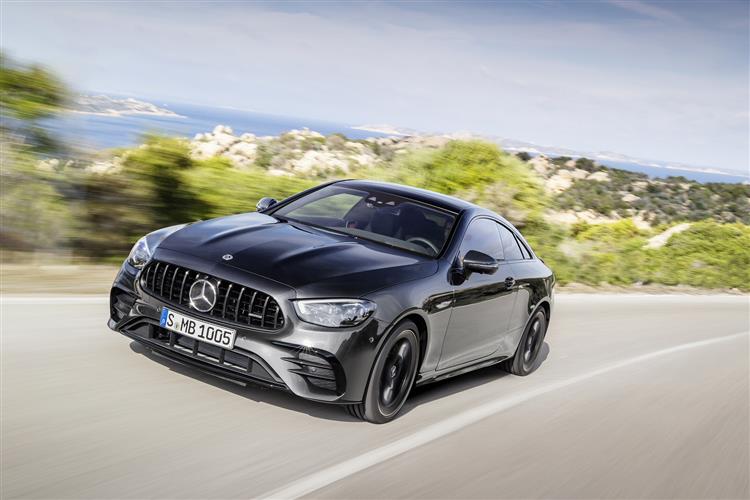 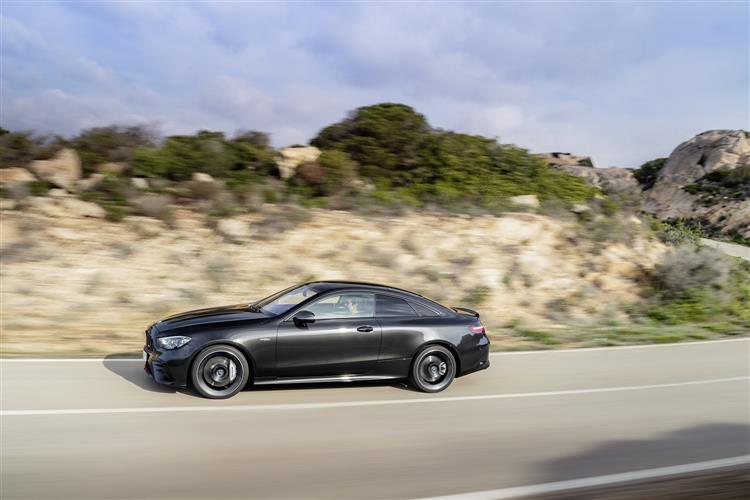 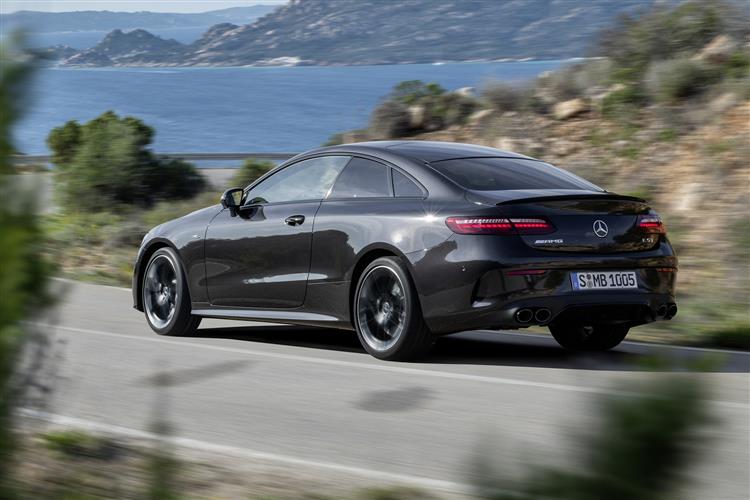 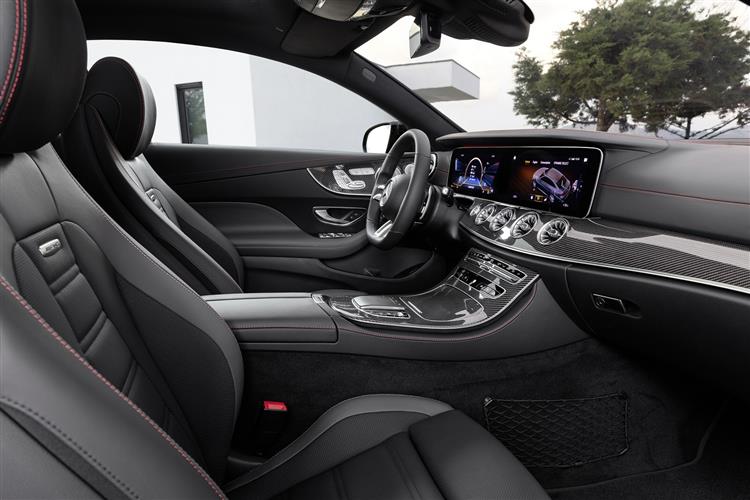 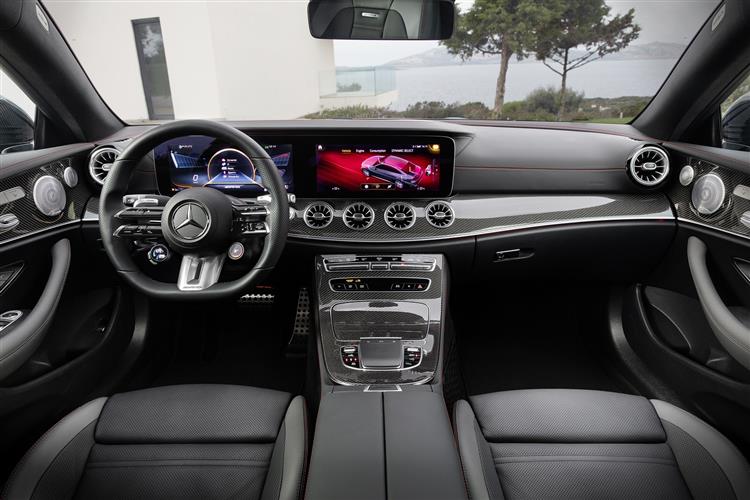 The Mercedes-AMG E 53 4MATIC+ Coupe was first launched in 2019, then lightly updated a year later to create the car we're going to look at here. The E 53 wasn't the first Mercedes-AMG version of the current generation E-Class Coupe; this '53' variant directly replaced an E 43 4MATIC version of this model, which had a V6 engine and 367hp. Here though, you sense that Mercedes' Afalterbach luxury division got itself a lot more serious about developing this car. The switch to 'E 53' status saw a change to inline six cylinder power and a power hike to 435hp at the same time as this E-Class variant future-proofed itself with a switch to mild hybrid technology. Add in the smarter exterior look and higher quality cabin that came with this model's mid-2020 upgrade and potentially, you've got quick a desirable performance package. Let's take a look.

Before this E 53 model's mild hybrid in line six cylinder powerplant arrived in 2019, there was quite a gulf between the two engines that the Mercedes-AMG sub-brand used for its larger cars. These being the V6 '43' unit and the 'blood and thunder' 4.0-litre V8 of the ballistic '63'-series cars. You still can't have an E-class Coupe (or for that matter, an E-Class Cabriolet) with the V8 engine, but this E 53 model's in-line six cylinder 435hp unit delivers a lot of the performance that unit might provide for this body style. Together with a vastly more acceptable set of running costs thanks to the newly integrated mild hybrid tech. But you don't want to know about all that - not in this section anyway. You want to know how fast this E 53 Coupe goes and whether it's just a bit of a boat that goes very fast in a straight line but can't do a lot else. As has been the case with AMG-engined E-Class Coupes of the past. Well it isn't that. Come to this car and expect it to have the scalpel-sharp handling responses of a similarly priced but slightly smaller C 63 Coupe and you'll be disappointed. But it's more everyday-usable than one of those thanks to an AMG DYNAMIC SELECT driving modes system and the addition of AMG RIDE CONTROL version of the Mercedes AIR BODY CONTROL air suspension system. Plus there's 4MATIC+ AWD, a 9-speed AMG Speedshift TCT paddleshift auto gearbox and an AMG Performance exhaust for an authentic sportscar soundtrack. It all makes this car certainly quite dynamic enough to take on a direct class rival like a BMW M850i Coupe. Rest to 62mph takes just 4.4s and the top speed has to be artificially restricted at 155mph. It's also a more rewarding thing than the other car in this category that uses hybrid technology (albeit in full-hybrid rather than, as in this case, mild hybrid form), the Lexus LC 500h.

This revised E 53 Coupe model gets a revised AMG-specific grille with twelve vertical louvres. Plus there's a redesigned front splitter, this all creating a look intended to bring the appearance of this car into line with the Mercedes-AMG GT sports car. Visually, the '53' certainly stands out from lesser E-Class Coupes. The A-shaped design of the front, which becomes broader towards the bottom, and the flatter, sharper-cut all-LED headlamps create an especially powerful impression. The powerdomes on the bonnet also contribute to this effect. In the centre section the front apron is drawn high into an A shape, creating a further large air inlet grille with five vertical struts. The wheels are also revised - 19-inchers as standard and 20-imch rims available on request. Slip behind the wheel and if you're familiar with the pre-facelift version of this model, the main change you'll notice might well be the new AMG Performance steering wheel, which has more responsive touch-sensitive buttons. The front of the cabin is now dominated by a couple of 12.3-inch screens, one for the instruments and the other for the infotainment functions. What's really different though, is the fact that these monitors now work with the brand's latest MBUX interface, which means that you get far more sophisticated "Hey Mercedes" voice control and a lower touch-sensitive pad to replace the previous click wheel controller. As before, it does of course all feel suitably premium, with leather-covered doors, subtle ambient lighting, AMG-specific seat upholstery and red seat belts, plus trim elements in carbon fibre or a glass fibre and matt silver combination. The rear seat offers more space than any other Coupe in the segment - this really is almost a proper adult 4-seater. But the 425-litre boot is surpassed in size by rivals. Should you want to carry longer items, the split-folding rear seat has two larger outer sections and a narrower middle portion that's ideal for pushing through skis or golf clubs.

The E 53 4MATIC+ Coupe comes in two levels of trim, with prices that are pitched at around £67,000 for the standard 'Premium' version and around £70,000 for the plusher 'Premium Plus' variant. You can also get a Cabriolet version of this car at a premium of just under £5,000 more. As you'd expect for that kind of money, equipment levels are generous. As well as AMG Body styling, you get 19-inch AMG alloy wheels, AMG Ride Control damping with AIR BODY CONTROL air suspension and an AMG Performance exhaust system Inside, the nappa leather sports seats are power-operated and fitted out with red belts and a memory package. There's also the Mercedes 'Widescreen Cockpit' screen package that bonds together a 12.3-inch MBUX centre-dash infotainment screen with a digital instrument cluster layout of the same size. In addition, there's a wireless charging mat and black open-pore ash wood trim. Stretch to 'Premium Plus' trim and Mercedes will give you larger 20-inch 5-twin-spoke AMG alloy wheels, a panoramic glass sunroof, rear privacy glass and a 13-speaker 590-watt 9-channel Burmester surround sound system.

The E 53's engine is embellished with a bit of mild hybrid tech based which sees an EQ Boost starter-alternator motor mounted between the engine and the 9-speed gearbox. It's a key component of the 48-Volt on-board electrical system. The mild hybrid system adds another 16kW (or around 20hp) of boost to the total power output and 250Nm of extra torque and has been designed for maximum energy recuperation and the virtually imperceptible restarting of the engine with the start/stop function. There's also a gliding mode that disconnects the engine from the gearbox at a cruise. This powertrain also incorporates an exhaust gas after-treatment system mounted near the engine and a standard-fit particulate filter, the only part of the exhaust system that's under the floor. You shouldn't get your hopes up to much for the difference all this will make; the WLTP combined cycle fuel reading is 31.4mpg and the WLTP-rated CO2 return is up to 198g/km. To put that into perspective, the full-hybrid model in this segment, the Lexus LC 500h, manages 42.8mpg and 150g/km. But it's considerably better than the readings you'd get from a V8-powered C 63 Coupe model that wouldn't actually take you very much faster; that car can only manage 28.0mpg and 230g/km.

Do you really need a faster, more luxurious performance coupe than this? Probably not. That won't prevent this E 53 Coupe from being a super-rare sight on our roads though. But if you're fortunate enough to be considering one, that'll be all part of the appeal. It's practical and reasonably spacious in the way a C 63 Coupe isn't. It's sharper to drive and much more affordable than a Lexus LC or a BMW 8 Series Coupe. And, thanks to 4MATIC AWD, AMG Ride Control and the AMG Speedshift gearbox, it feels more dynamic than any AMG-fettled E-Class Coupe before it. There's even a Cabriolet version if you want a more exclusive feel. You could spend twice as much as Mercedes is asking here and not really better what this car can offer in terms of performance, dynamic ability, luxury and even exclusivity. If you don't feel the need to and find yourself in the market for a very quick, very plush four-seat luxury coupe, then this one might be hard to ignore.

END_OF_DOCUMENT_TOKEN_TO_BE_REPLACED

"I have recently taken delivery of a company vehicle via Silverstone. I was introduced to them by my accountant who said they were very competitive. A major factor for me was that Volkswagen wanted a £3k deposit during the 4 month build period. That is a lot of money sitting in someone else's bank. The deal I got and the service I received from start to finish was excellent. The staff are very friendly and professional. There was not one step of the process where I was not kept informed. I will definitely be using them again and highly recommend them. UPDATE June 22 - I have just taken delivery of another vehicle via Aby at Silverstone FM. The service was excellent yet again. No messing around at multiple dealerships, the admin process was easy and straight forward. Highly recommended yet again."

"From start to finish the service has been fantastic, nothing was too much effort, the car arrived on time and the whole process was simple and effective. Would definitely use again."

"Amazing colleagues always on hand to help. Abi has been first class in helping me with my previous purchase and my recent enquiries. She was warm, welcoming and super supportive. A brilliant asset to the team at Silverstone Fleet Management. 👍🏽👏🏽"

"Ryan was great from start to finish! Very patient in an ever evolving situation but we got there in the end! Thanks again"