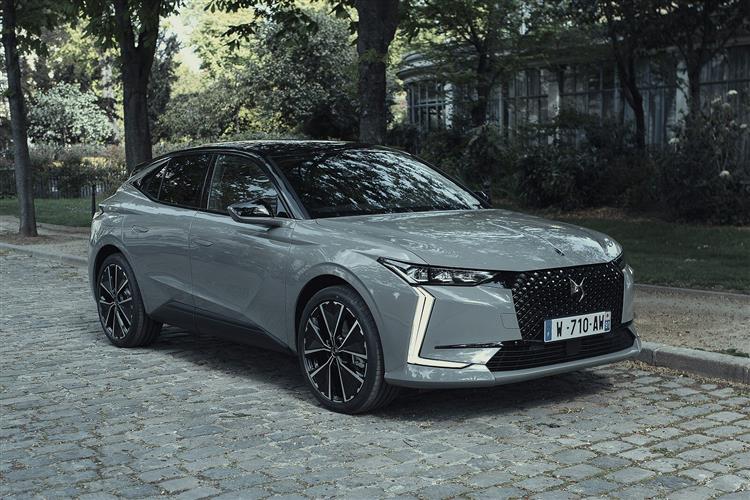 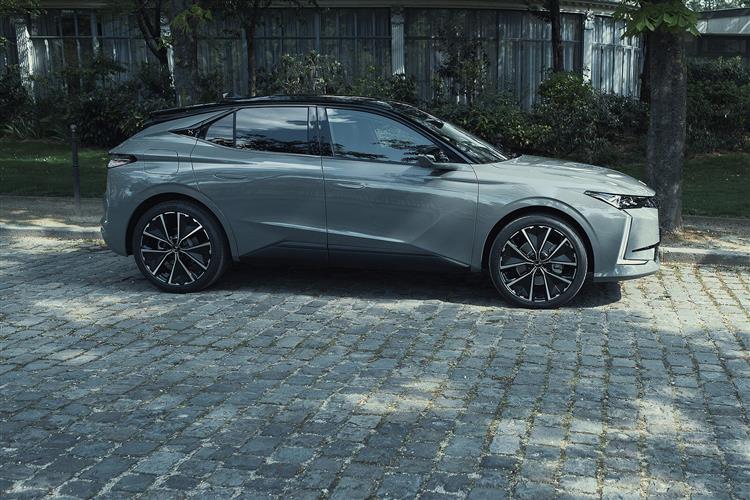 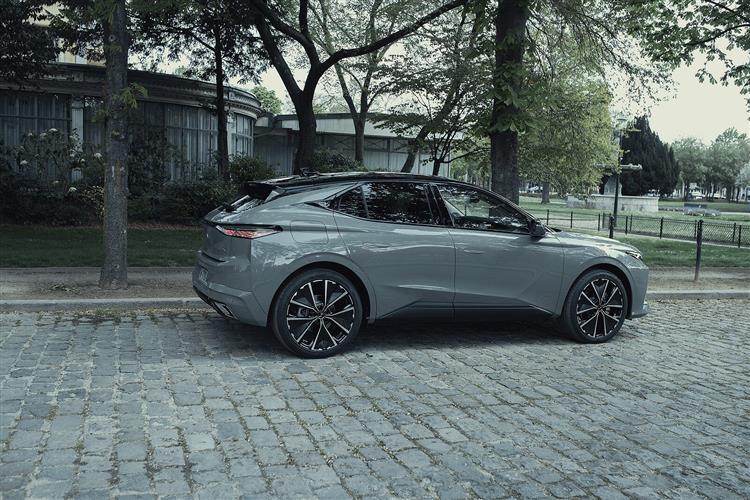 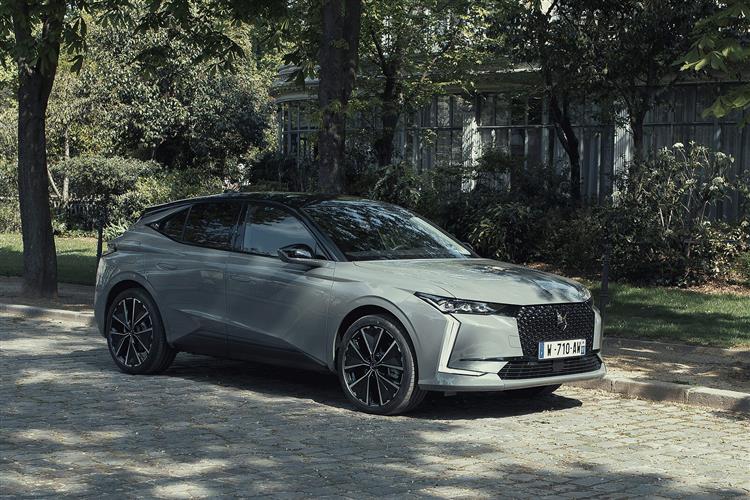 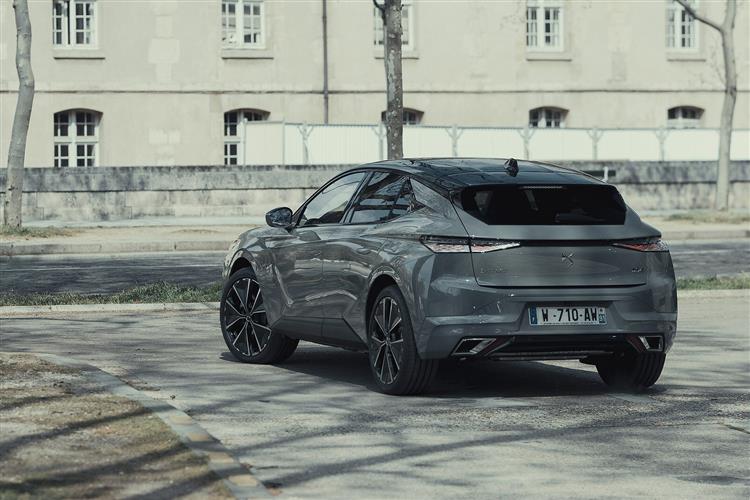 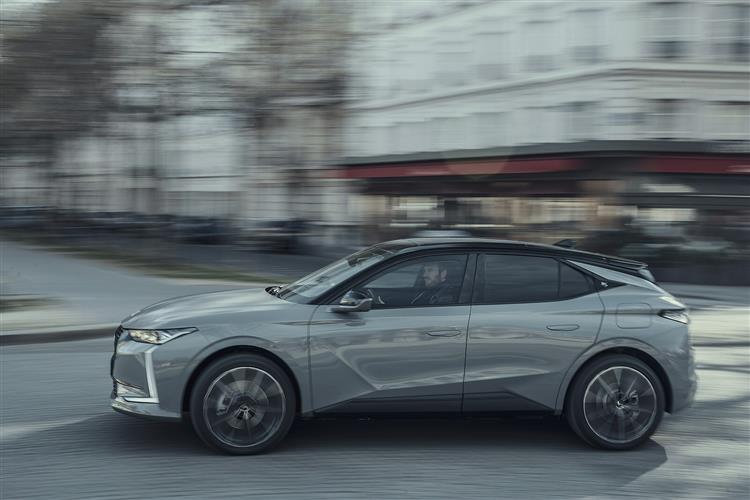 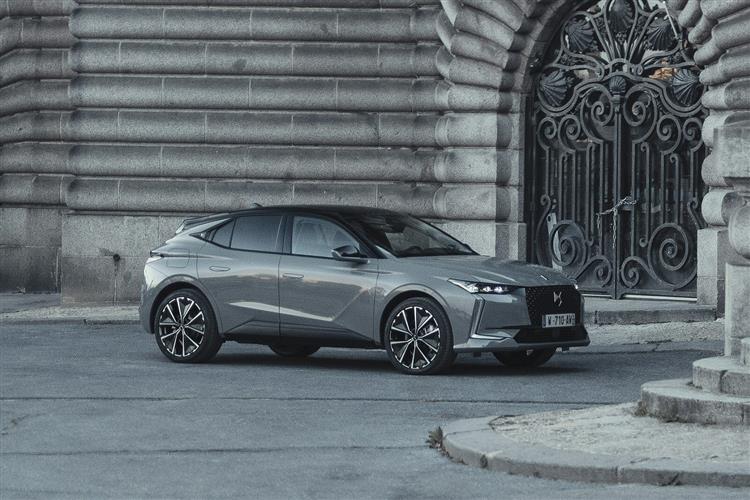 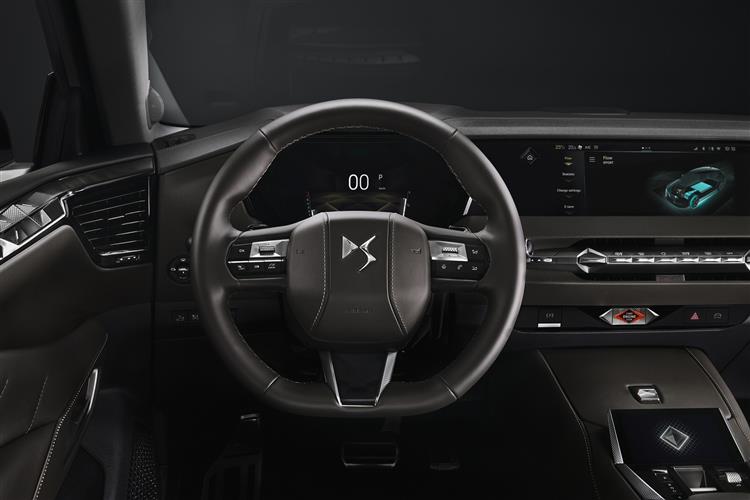 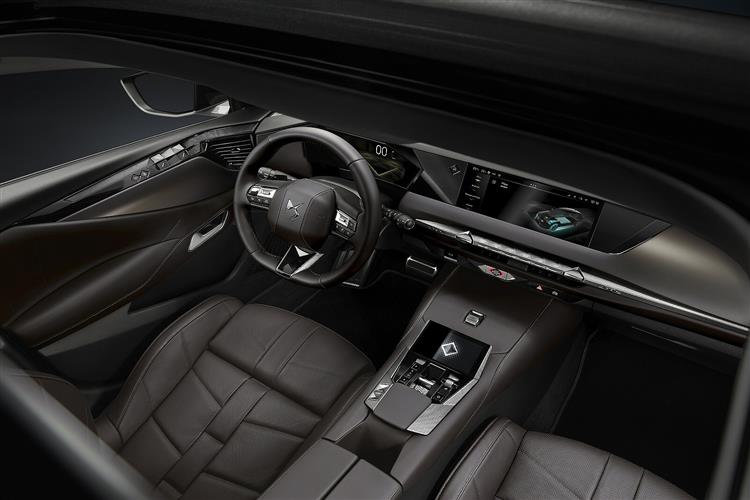 The PSA Group's DS brand has yet to gain much traction in the UK. Here's where that has to change. A quick history. The brand launched in stand-alone form in 2015, mostly re-badging sportier Citroens until it could launch its own design, the DS 7 Crossback SUV, in 2017. Since then, we've had the small but rather curious-looking DS 3 Crossback. And the DS 8 upper mid-sized saloon. Nothing though, to really get people talking. But this car, the second generation DS 4, just might. The company's first DS 4 sold between 2015 and 2019 and was one of those re-badged Citroens just mentioned, though in that case, the donor car wasn't a sporty one. The design instead was essentially almost entirely borrowed from the rather mediocre underpinnings of a second generation Citroen C4. Back then, the market didn't much want a C4 - and it didn't want a pricier C4 in a tux either. But forget all that because second time around, this DS 4 is a very different proposition. Surprisingly, for the time being anyway, DS isn't making a slightly larger compact SUV than the DS 3 Crossback. Which means that this DS 4, though really a compact premium hatch taking on the Audi A3 Sportback, the BMW 1 Series and the Mercedes A-Class, must also try and appeal to people who might want an Audi Q3, a BMW X1 and a Mercedes GLA. That's a lot to ask - from a car with a lot to prove. Can it deliver? Let's find out.

The avant garde looks promise sophisticated driving technology and that's what you get. For top variants, DS has carried over its clever Active Scan Suspension system from the DS 7 Crossback. This scans the road ahead as you drive, over a distance of between 5 and 25-metres and alters damping, dependent on the state of the tarmac. You can also specify infra-red night vision. And Level 2 semi-autonomous driving tech. Enough with that - you'll want to know about engines, all of which are familiar PSA Group powerplants and all of which, non-negotiably have to come with EAT8 8-speed automatic transmission. There's a 130hp 1.5-litre BlueHDi 130 diesel for those still addicted to the black pump. And three conventional PureTech petrol units, a three cylinder turbo 1.2-litre unit with 130hp; and two 1.6-litre powerplants, with either 180 or 225hp. There's no full-electric variant, which is odd, given that the current Citroen C4 can be had in full-EV form. But DS does offer a PHEV plug-in derivative that, as with various other Peugeots, Vauxhalls and Citroens that use it, features a 1.6-litre PureTech petrol engine mated to an electric motor powered by a 12.4kWh battery for a combined output of 225hp and an electric driving range of 31 miles. The DS 4 uses the same EMP2 platform as other mid-sized PSA Group models like the Peugeot 3008 and Citroen C5 Aircross. But 70% of it has been modified to meet various specific DS 4 requirements. One of these is the need to accommodate the particularly large 20-inch wheels. The electric power steering system has been tweaked to suit these too.

DS hopes that the look of this car will sell it to you - and for sure it'll stand out in the supermarket car park. At first glance, you might be undecided as to whether this is a premium compact hatch or a premium small SUV - and that's entirely intentional. The styling's certainly Gallically avant garde, the front dominated by bold double daytime running lights and trendy matrix LED headlamps. In profile, you'll notice striking creases, door handles that pop out as you approach the car and wheels that can be as large as 20-inches in size. Coupe lines characterise the rear, where the boot lid plunges to mee the slim LED tail lamps. Pavement presence? You get it here. Inside the so-called 'Digital Seamless Cockpit', there's a fully digital cabin made up of no fewer than three displays, There's a 10-inch screen replacing conventional dials in the instrument cluster. And an infotainment display of the same size in the centre of the dash for media and navigation. This is controlled by a third 5-inch screen further down the centre stack known as the 'DS Smart Touch'. If that's not enough screen tech for you, it's also possible to specify the segment's cleverest head-up display, claimed to be closer to augmented reality than any other system. The information viewed doesn't just get projected onto the windscreen; it instead gets projected further out onto your view of the road in a range 4-metres ahead and on an image 21 inches wide. Another interesting touch is the lack of visible air vents; the main ventilation unit has been integrated behind and strip of physical switches that sit just below the main control screen. Out back, rear seat space is reasonable but unremarkable. And there's a decently-sized 430-litre boot - though this total falls to 390-litres in the PHEV variant.

This is where you have to decide whether your DS 4 should look like a premium compact hatch - or an SUV. If a premium compact hatch, you'll choose either base 'DS 4 Bastille+', DS 4 Trocadero', 'DS 4 Rivoli', 'Performance Line' or 'Performance Line+'-spec. If you like the Crossover vibe, you'll opt for a 'Cross Trocadero' or 'Cross Rivoli' trim level. In keeping with its SUV pretensions, the 'Cross' derivative gets roof bars and black plastic cladding. As with its direct rivals, the BMW 1 Series, the Audi A3 Sportback and the Mercedes A-Class, it's theoretically possible to get a DS 4 for around £25,000, but with the spec you'll probably want, a £30,000-£35,000 budget is probably more realistic. Allow a hefty premium of around £6,000 to get your chosen trim level with the 'E-TENSE' PHEV Plug-in Hybrid petrol powertrain, rather than the comparable BlueHDi 130 automatic diesel powertrain package. You'll certainly need a plump budget if you want cutting edge tech like the Active Scan suspension system. And maybe one of the exquisitely stitched leather upholstery packages. You might also want to save some budget for features like the night vision set-up and the Head-up display. DS expects a large proportion of customers (maybe around 30%) to opt for the E-TENSE PHEV plug-in model.

All the engines are pretty efficient. The volume 1.2-litre three cylinder 130hp PureTech petrol unit should give you around 45mpg on the combined cycle and 132g/km of CO2. The 1.6-litre PureTech 180 petrol unit should manage around 40mpg and 147g/km of CO2. For the 1.5-litre BlueHDi 130 diesel, expect close to 55mpg and 121g/km of CO2. For really frugal running cost returns though, you'll need the clever PHEV plug-in variant. This uses an 11.8kWh battery which can be fully charged in under two hours using a standard 7kW Wallbox. Once that's done, an all-electric WLTP-rated driving range of 31 miles is possible. Even better news lies with the low WLTP-rated CO2 readings and combined cycle fuel readings generated by this plug-in model; expect 30g/km and over 200mpg. DS has sweated the details to get these kinds of returns. The engineers for instance achieved a 10% weight reduction in the weight of the alloy wheels (that's 1.5kg per wheel) with aerodynamic inserts in order to reduce fuel consumption and CO2 emissions. Servicing on most DS 4 models is needed every year or every 12,500 miles and the cost of garage visits should be affordable too.

If the DS brand can't make this second generation DS 4work, it's hard to see much of a future for the marque. The DS 4 does, after all, tick all the current boxes for market growth, appealing to SUV folk and simultaneously tapping into the buoyant segment for premium badged compact hatches. The trick for the Gallic marketeers here will lie in convincing customers that this is a credible premium design in its own right, something the first generation DS 4 clearly wasn't. This replacement car deserves a second chance from those who might have rejected its predecessor - or, more likely, failed to even notice its existence. It has the kind of pavement presence a rival 1 Series, A3 Sportback or A-Class noticeably lacks unless very expensively embellished. And there's some cutting-edge technology here that you just can't get with those cars. Will all that be enough though, given compatible pricing? It'll be interesting to see.