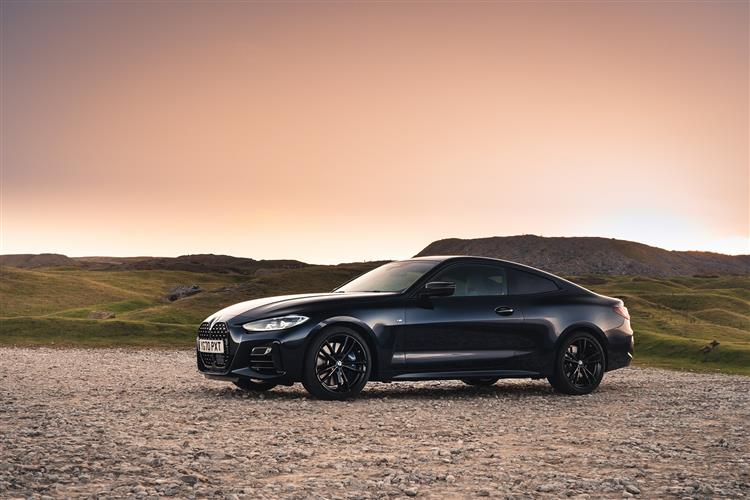 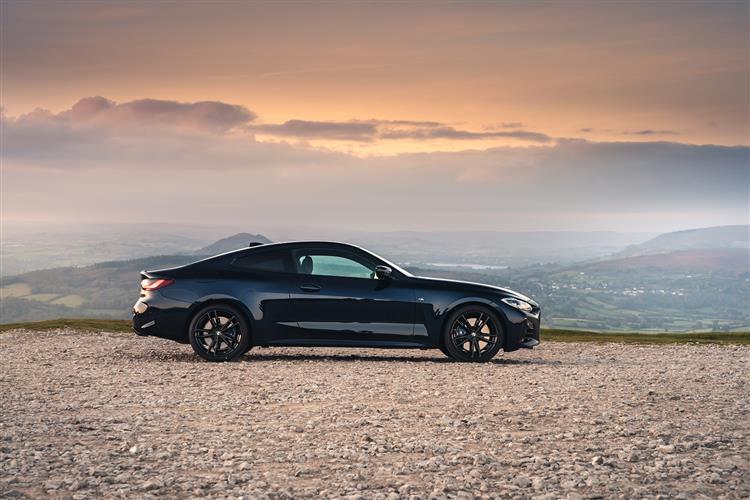 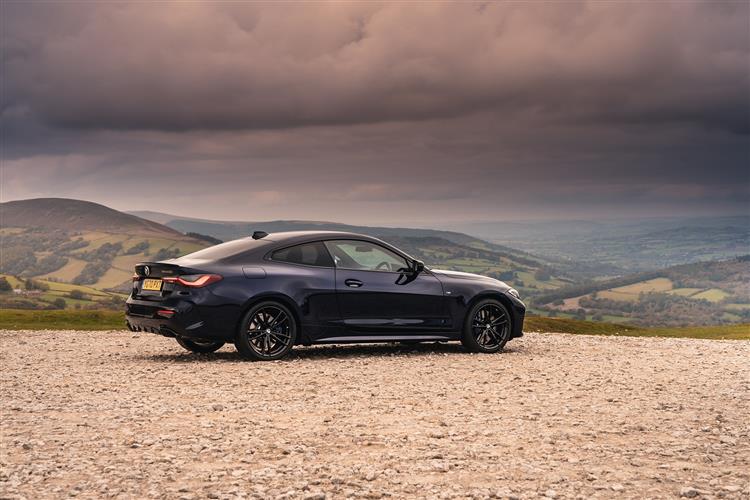 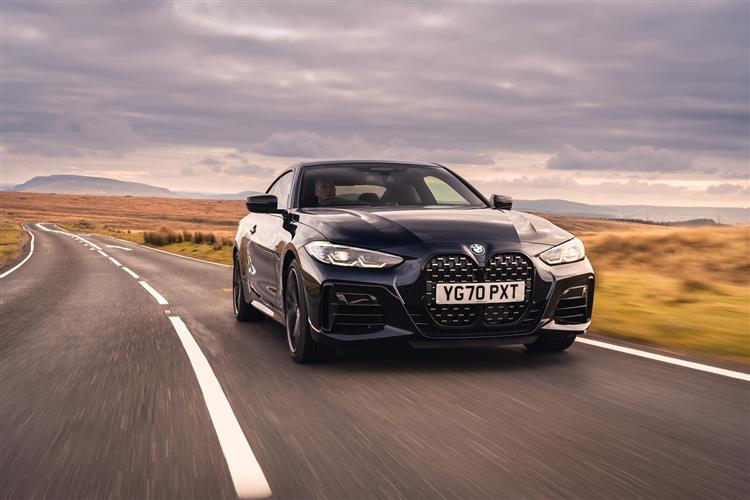 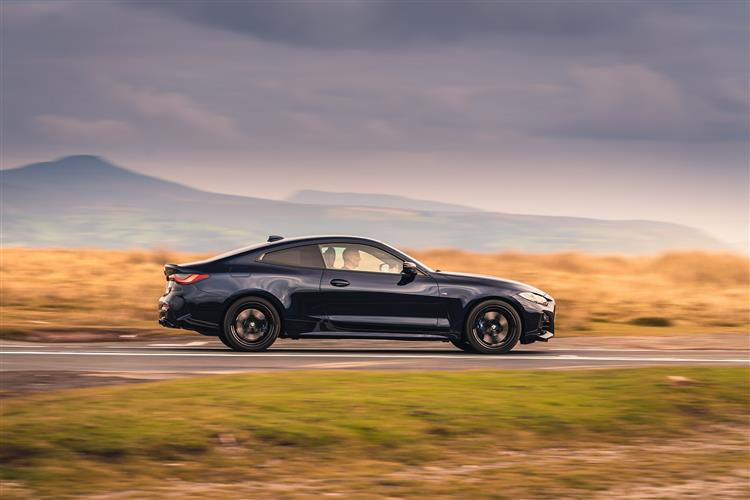 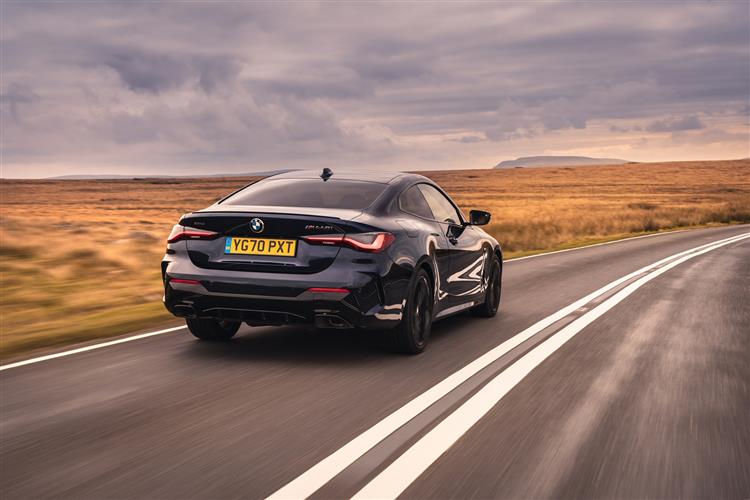 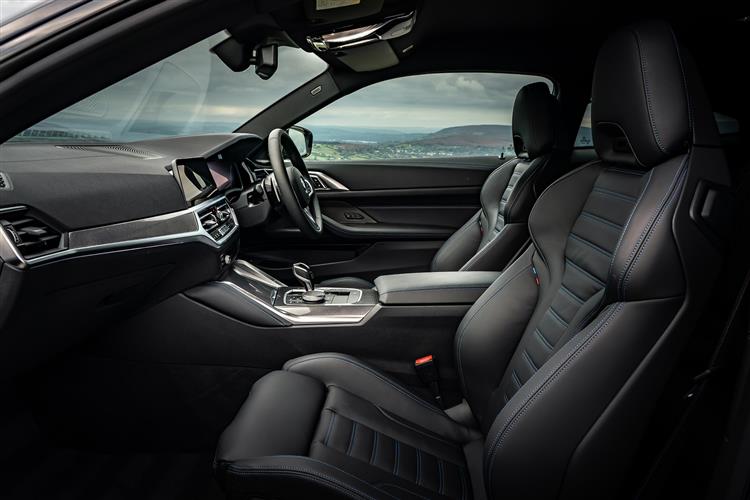 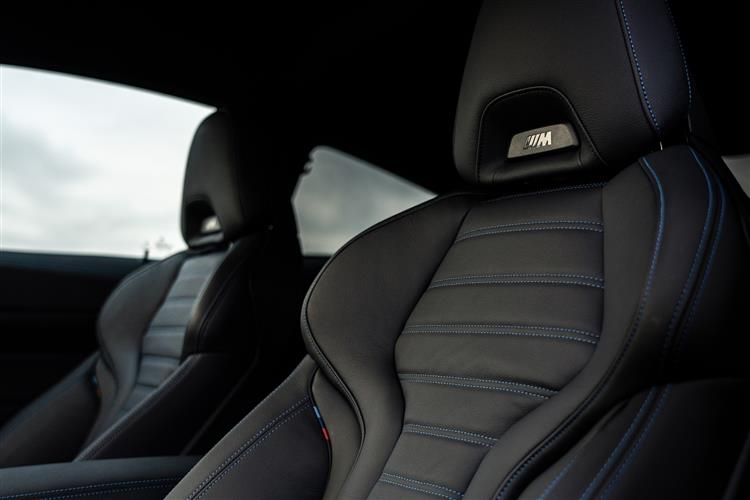 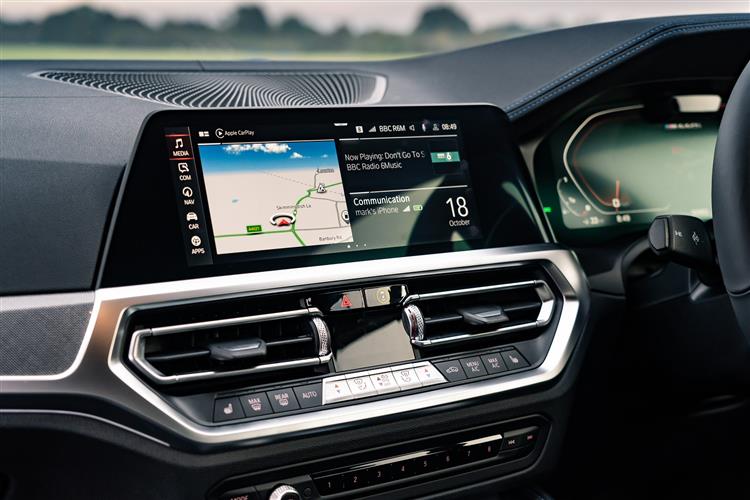 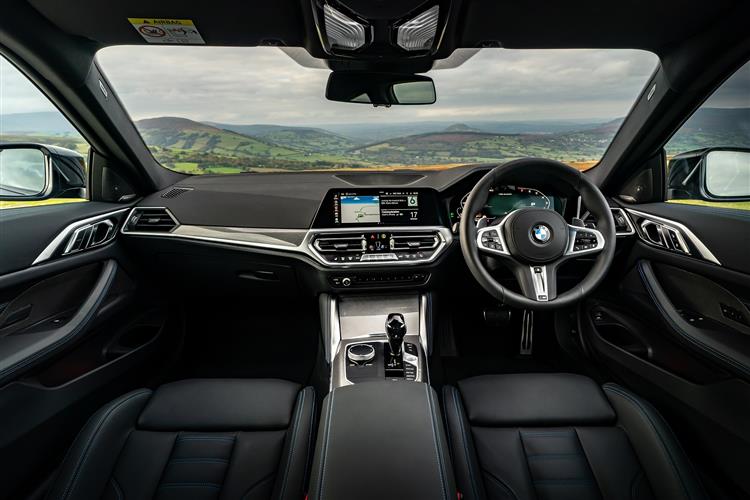 The BMW 4 Series Coupe. It's just a two-door version of the Munich maker's 3 Series model isn't it? Used to be. Isn't now. Yes of course, the second generation 4 Series Coupe we look at here shares its technology and engines with the '3'. But visually and in character, it's now been differentiated from its more common showroom stablemate in a way that its predecessor never was. BMW says this MK2 4 Series Coupe handles quite differently from a '3' as well, even a sporty one. But as before, it sizes up to the same two segment arch-rivals, Audi's A5 Coupe and the Mercedes C-Class Coupe. And, also as before, it's additionally available in Convertible and four-door Gran Coupe forms.

BMW claims the differences with this MK2 4 Series Coupe are more than skin deep and will be equally evident in terms of drive dynamics. The chassis has been extensively tweaked over that of the 3 Series and there's a wider rear track that gives this car a 21mm lower centre of gravity than its showroom stablemate. Plus as usual, there's rear wheel drive (and optional xDrive 4WD) and classic 50:50 weight distribution. And that's just the start. The body and suspension mountings are stiffer and on standard suspension, this '4' rides 10mm lower than a '3'. There are firmer springs and anti-roll bars and clever lift-related dampers reduce body movement and sharpen corner turn in. Plus there's a freshly developed double-jointed spring-strut front suspension and a 5-link rear axle. Engine-wise, the key news is introduction of 48V mild hybrid tech for the 2.0-litre 184hp diesel engine in the volume 420d. The same mild hybrid tech also features with the six cylinder diesels, the 430d (286hp) and the M440d (340hp). And it's on the quickest conventional petrol variant too, the six cylinder 374hp M440i xDrive. A flagship M4 model will follow. Two conventional 2.0-litre petrol turbo versions also feature, the 420i (184hp) and the 430i (258hp). All the engines link up as standard with eight-speed Steptronic auto transmission, which can now be specified with a new optional Sprint function.

No doubt about the main talking point here. The more vertical upright kidney grille, intended to reference classic BMWs like the pre-war 328 sports car. It's a move that's evoked a mixed reaction from brand loyalists, but as Design chief Domagoj Dukec points out, until the 1980s, the grille is on BMWs were always more vertical than horizontal. There are other changes from the norm here too: no horizontal shaven line - and no classic 'Hofmeister kink' in the rear C-pillar. Plus this coupe is 120mm longer than before, as well as being 27mm wider and 6mm taller. The CLAR mixed steel-and-alloy platform that underpinned the previous version of this car is retained, but BMW has tried to reduce its weight through greater use of aluminium panels. Inside, the cabin follows some of the latest BMW design trends, with a revised dash layout including a smarter drive selector and a start button in the centre console. The 'BMW Live Cockpit Professional' dash set-up is standard, offering a fully digital screen layout that gives you a high-resolution 12.3-inch instrument cluster behind the steering wheel and a 10.25-inch iDrive infotainment Central Control Display. There are also re-designed sports seats and the option of a re-designed head-up display. As before, this is billed as a 'proper four-seater' and there's a 440-litre boot, extendable via 40:20:40-split backrests.

Sporty 'M Sport' trim is standardised this time round and prices start from around £40,000 for the entry-level 420i. There's a further £2,500 premium if you want the 420d diesel version - which can be had with xDrive 4WD for another £1,500 more. You're looking at around £44,000 for a 430i. And think in terms of around £54,000 if you want the M440i xDrive model. As an option, there's an 'M Sport Pro' package which includes a special 'Sprint' function for additional bursts of speed and a sporty engine soundtrack in the cabin when the 'SPORT' driving mode is activated. Plus you get M sport brakes, 19-inch 'M light' alloy wheels, a rear spoiler in a high-gloss black, BMW individual high-gloss 'Shadowline' trim with extended features and BMW individual lights and M seat belts. You might also be interested in a browse through the M Performance Parts portfolio, from which you can order things like 20-inch M Performance forged light alloy wheels in a Y-spoke design with a Jet Black matt finish. Or maybe a carbon fibre finish for the front grille, front splitter and side skirts, as well as aero flicks for the front apron in high-gloss black.

So is this BMW 4 Series Coupe still the car in this class that does it all, the sector benchmark, the go-to choice in its segment? If you're the kind of driving enthusiast this model has traditionally appealed to, the answer's probably yes. Overall, there's a sustained level of excellence shot throughout this contender that Audi A5 and Mercedes C-Class Coupe rivals still can't quite match. That's something especially evident when it comes to handling dynamics that have been usefully improved in this MK2 model, especially when it comes to suspension and steering response. There's a levity about this 4 Series, a certain joy you get in driving it that the others can't quite emulate. Great then, that it does all the sensible stuff really well too. You get a spacious boot, comparatively decent rear legroom, very competitive day to day running costs and sensible residual values. Which all helps your conscience. Why? Because this is a car that, exactly because of those attributes, you can buy and use - and use hard - without that nagging sense of guilt that you may have over-indulged yourself.